Early Wednesday morning, right around the time of Clinton’s concession speech, I changed my Facebook imagery to reflect my despair.

For those that don’t recognise the scene, go refresh yourself with the video.

I haven’t changed it, and I’m not certain if I will in the next few years.

Now, people are expecting me to rally around Trump, as if Trump failing would mean that the country failed. I’m afraid that those people have it backwards: there isn’t a greater threat in the next few years than Trump succeeding. Let’s try to look past his appeals to racial and religious hatred for a moment, and look at his actual plan. After all, what has Trump promised to do?

Eliminate Religious Freedom
He’s promised to endorse “religious liberty” bills. You know, those backwards pieces of legislation that claim to protect people’s religious rights, but actually eliminate them. Remember, religious freedom is not the right to make others stop doing things your religion disapproves of, it’s the right to do things despite other people’s religious objections. No one should have to shop around for a county clerk that will approve of their marriage or a Child Welfare agent that will approve their right to adopt a child: the government is equally beholden to us all.

Even those that think that it’s wrong to let government officials shirk their duties will sometimes praise the infamous Hobby Lobby decision, which held that someone’s health benefits could be conditional upon the religious beliefs of the employer. Catholics and Evangelicals rallied around this one, and seem supportive so long as it’s things that they don’t believe in that are affected, things like safe abortion services and access to contraception. But extend it for a moment: how would you feel if you went to work for small company owned by a Jehovah’s Witness and found that your health plan didn’t cover blood transfusions? Or a Christian Scientist, and found that your health plan only covered faith healing?

So, no thank you, I sincerely want Trump to fail on that one.

Destroy our Climate
Next, he’s essentially promised to destroy the world in order to line his own pockets while he’s alive. Go take a look at his Energy Independence manifesto, where he denies basic science and promises to go back to coal burning. I know some of you have been lied to and told that there’s doubt about climate change, but there’s not: 97% of climate scientists believe that it’s a real threat. Denying climate change is roughly on par with believing the Earth is flat. Will it destroy the planet before Trump or Trump’s children die? Probably not, and that seems to be what he cares about.

So, no thanks again, let’s hope that Trump fails at creating Waterworld.

Intrude On Our Private Decisions
Next, Roe v Wade, which he has promised to work to overturn. This is  a part of my religious freedom point above, but requires a separate bullet. People think of Roe v Wade as an abortion decision, but it’s much more than that. It’s the logical consequence of the constitutional law that protects our right to non-interference by the government. It (coupled with the less famous, but equally important Griswold v Connecticut and  Eisenstadt v Baird) recognised that our Constitution contains an implicit directive that the Government can’t make private decisions based on moral disapproval, that it has to have an actual justification based on the impact of our acts upon others. You can’t be for personal religious freedom and oppose Roe v Wade. Incidentally, for those that argue against a “right to privacy”, that wasn’t established by Roe v Wade, that was Griswold v Connecticut. How many of you would actually go back to the days where married couples were forbidden from using birth control?

Preferential Treatment of Religious Groups
It’s really hard to argue with frightened Christians that they shouldn’t pass laws that discriminate against Muslim immigration. After all, they see all the scary pictures of Muslims rioting on their television, and people aren’t telling them that those Muslims represent the typical Muslim about as much as Westboro Baptist Church represents the typical Baptist. 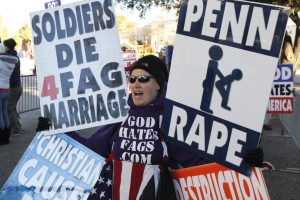 This is not your typical Baptist

As a disclaimer, Freddie Phelps, leader of Westboro Baptist, shot my brother’s dog, so I may not be the most objective of observers, but I think most folks would agree with my conclusion that they would not want to judge all Baptists by examining Westboro Baptist.

Not surprisingly, nearly all non-Christians see the danger in this logic. It’s no surprise that the voting against Trump went nearly by racial and religious lines (Jews went 71/29 against, about the same as ratio as all non-Christians).

Please, let’s hope Trump fails with this idea as well.

Ignore the Fourth Amendment, Especially in Regard to Blacks
Trump’s answer to the problems facing the black community? Stop-and-frisk policing. It always amazes me how people are so vocal about the First and Second Amendments and then look the other way while we permit police to stop people without probable cause and search them. This is the heart of the Black Lives Matter movement: we permit our police to search stop and search people on the vaguest of pretexts, they, in turn, use being black as that pretext, and, statistically, blacks have a lower chance of surviving each individual encounter with police.

One Response to Helping Trump Succeed is a Very Bad Idea